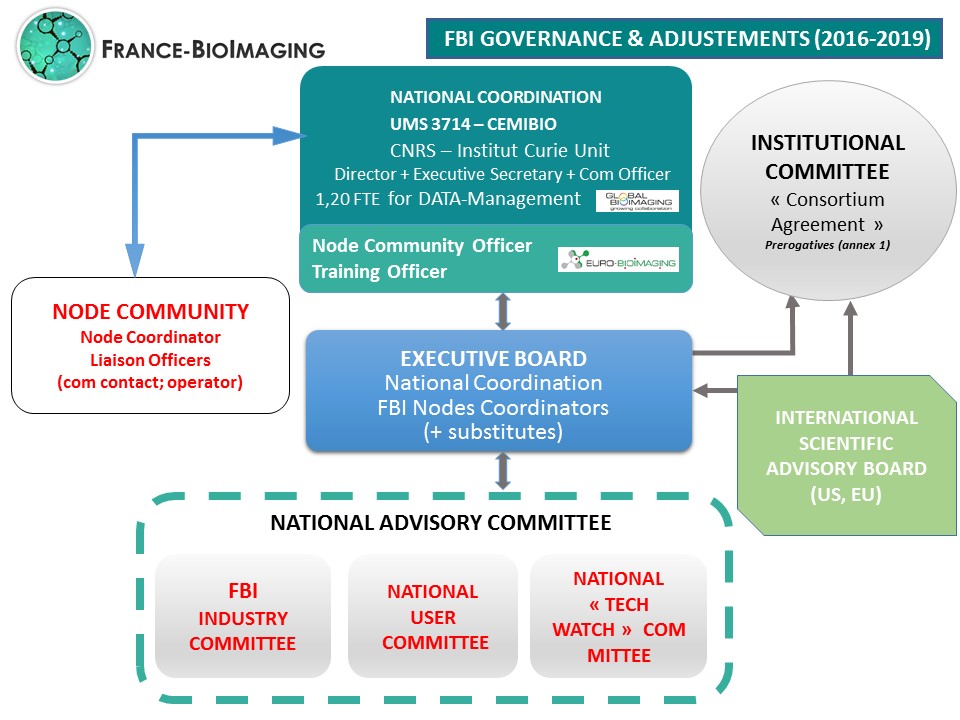 The Executive Board comprises the National Coordination, the six nodes coordinators or their substitutes, and Representatives of the FBI core Facilities. According to the topics to be addressed, members of the National Advisory Committee are invited

The NUC is composed of users of our facilities who do not belong to the France BioImaging perimeter. It gives completely independent recommendations and suggestions on the user-related activities of FBI.

The NUC allows FBI to keep in contact with the overall national community involved in the development of imaging instruments and methods in R&D labs and core facilities. NUC stands several times a year, in order to consider and include user recommendations and suggestions in the overall improvement of the infrastructure.

The IC is composed of local representatives of companies involved in field of microscopy, from start-ups to big conglomerates.

The IC gives recommendations and suggestions on the direction of industrial partnerships initiated by FBI. It is also actively involved in the implementation of FBI’s integrated training offer, as members of the IC have noticed the need to gather and coordinate efforts to provide the best training, from fundamental knowledge to practical skills, in order to create a virtous circle that benefit the whole community.

The IC follows rules of procedure defining its organization.

Please click here to consult the Rule of Procedure document.

The National Tech Watch committee is composed of representatives of the technological networks and research groups (GDR) in our field. It allows for the coordination of the communities specialized in biological imaging technologies and methodologies. FBI has signed partnerships conventions with the RIME and RTmfm networks. The “Tech Watch” committee gathers the whole  community of biological imaging, beyond the official FBI’s perimeter.

These networks (and others) branch out into regional and local scales. FBI’s dissemination and animation activities are also inscribed in such local contexts (PhysChemCell, Light Sheet Microscopy, Storage Day in collaboration with IFB, chemical cell imaging, RIC Paris-Saclay, etc.)

One of the missions of the Tech Watch Committee is to establish a benchmark of the activities of the biological imaging communities outside of FBI’s perimeter and to transmit the information to the National Coordination, which is then able to determine the worth and feasibility of FBI’s involvement. The committee will also weigh in on the elaboration and implementation of a “Best Practices for FBI Users” document, which is a crucial tool to guarantee the best possible acquisition and use of biological imaging data by the users of the national core facilities, even beyond FBI. This document will be one of the essential missions carried by the Node Community Officer. A white paper on the topic could be released as well.
Node Community

The FBI node community is composed of all the Core-facility and R&D staff. They are at the heart of the France BioImaging activities, and as such, are a pivotal source of information to shape FBI’s strategies. In 2019, a dedicated CoreF WG was created, Its role is based on the node COMMUNITY tasks. Their representatives are permanently invited to the Executive Board (Executive Committee)

The Node Community is composed of all the FBI platform heads of staff.

The Node Community runs the daily activities of the core-facility and R&D platforms.

Scientific Advisory Board (SAB)
The SAB is composed of six independent and eminent members of the scientific community in the field of biological imaging, from abroad.
MembersTasks

The SAB gives recommendations and suggestions on the scientific perimeter and technological developments carried out by FBI, but also on the efficiency and pertinence of both service and technological transfer from R&D teams to the Imaging Core Facilities open to users.

The SAB examines the results and projects of the infrastructure every 2 years, evaluates progresses, strengths and weaknesses, and proposes new avenues of service opening and offer, scientific investigation and technological development.

Institutional Committee (IC)
The institutional committee involves representatives of all signatories of the Consortium Agreement.
MembersTasks

The Institutional Committee takes responsibility of decisions concerning major changes in orientation, composition, evolution and sustainability of the national infrastructure FBI.
It is also convened in case of major conflicts between members of the Executive Board.

For all the above reasons, the national coordinator informs the main supervising institution of FBI, the CNRS. Then, the CNRS notifies the other Parties and organizes debates and meetings. Final, the Institutional Committees takes decision, if necessary.