Six months appraisal of the calls for projects

After only 6 months of opening, FBI calls for projects are quite successfull and very promising. If the call “Support to events” has already funded more than 40 events since 2012, the two new calls launched in January are also quite successfull; both are available on our Web Access Portal (https://france-bioimaging.org/service-offering/). The first call is meant to enable “User Access” to highly advanced and rare technologies available in FBI infrastructure. 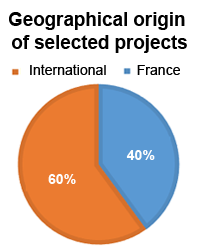 The second one is devoted to “Technological and Methodology Transfer” projects and aims to disseminate emerging approaches and know-how. As a start, on average, France BioImaging has selected and funded two projects of 10 weeks duration per month.

Among the eleven selected projects, 60% were submitted by foreigner colleagues and 40% by French scientists, external to FBI perimeter. Among international projects, two came from North America, two from South America and two from European countries. France BioImaging is proud to attract users from diverse backgrounds and different countries.

The Institute Jacques Monod hosted one project and the Photonics lab (Paris-Descarte University) will soon host the last project approved by the Executive Board. Bordeaux Node with the Interdisciplinary Institute of NeuroSciences hosted two projects and the Bordeaux Imaging Center, Jorge Toledo, University of Chile. Until now, other FBI-Nodes were serving external Users at the national level.

Dissemination of our service offering at the European level, beyond the FBI-Web, through the EuroBioImaging WAP should soon allow a wider promotion of imaging technologies and expertise available on France BioImaging Core Facilities and associated R&D labs.

In conclusion after the first six months of opening calls, we are more than ever motivated to continue on this path of opening state of the art imaging technologies to a broad scientific community in France and worldwide. There is still much to do, but the progress already made and the FBI impact beyond our expectation, encourage us to pursue our work for the future of Biological Imaging.

France BioImaging at EMC 2016
We use cookies on our website to give you the most relevant experience by remembering your preferences and repeat visits. By clicking “Accept All”, you consent to the use of ALL the cookies. However, you may visit "Cookie Settings" to provide a controlled consent.
Cookie SettingsAccept All
Manage consent

This website uses cookies to improve your experience while you navigate through the website. Out of these, the cookies that are categorized as necessary are stored on your browser as they are essential for the working of basic functionalities of the website. We also use third-party cookies that help us analyze and understand how you use this website. These cookies will be stored in your browser only with your consent. You also have the option to opt-out of these cookies. But opting out of some of these cookies may affect your browsing experience.
Necessary Always Enabled
Necessary cookies are absolutely essential for the website to function properly. These cookies ensure basic functionalities and security features of the website, anonymously.
Functional
Functional cookies help to perform certain functionalities like sharing the content of the website on social media platforms, collect feedbacks, and other third-party features.
Performance
Performance cookies are used to understand and analyze the key performance indexes of the website which helps in delivering a better user experience for the visitors.
Analytics
Analytical cookies are used to understand how visitors interact with the website. These cookies help provide information on metrics the number of visitors, bounce rate, traffic source, etc.
Advertisement
Advertisement cookies are used to provide visitors with relevant ads and marketing campaigns. These cookies track visitors across websites and collect information to provide customized ads.
Others
Other uncategorized cookies are those that are being analyzed and have not been classified into a category as yet.
SAVE & ACCEPT
Loading Comments...